Your Comfort Zone is the most dangerous Place to be

I recently facilitated a global leadership workshop for a group of very introvert MBA students – actually the most introvert group I have ever had. It was not a group of executive MBA students so they have both their life and challenges ahead of them. One of the major challenges they have is the competition from all the other great MBA graduates out there. I told them, “No matter how good grades you get, there are thousands of people out there who are better qualified than you are. You have to get out of your comfort zone”. I offered them a presentation skills crash course and asked how many were interested. Only a few partially active in the class raised their hands. I dropped the idea again.

These young people who have paid a lot of money to get an MBA will end up unemployed or in jobs way below what they academically deserve because they are afraid of getting out of their comfort zone. What is the point of being the brightest brain on the planet if nobody knows about it? Most actors are actually introvert according to Myers-Briggs surveys, but they have learned to take on an extrovert role when they are at work. Personally, I think introvert people are far more attractive to an employer. It is much easier to train an introvert to take on an extrovert role than training an extrovert to shut up.

But if none of these MBA students has the courage to leave their comfort zone they will end up being run over by less intelligent people with bigger mouths. Business as usual.

Many leaders are afraid of leaving their comfort zone too

Maybe we can explain why some students are reluctant to leave their comfort zones with laziness, lack of social skills, afraid of sticking out etc. but we do expect leaders to lead, to show the way and stand up for their followers.

I and my colleagues in Gugin have been in close contact with many leaders over the years. Most of them have been people leading the companies we have helped with post-merger integration or organisational change But also leaders who have participated in our survival trips or workshops. A number of them have ended up in trouble because they were afraid of change and afraid of making decisions where most of the parameters were unknown or uncertain. In these cases, they ended up doing nothing, which in some cases has taken down their company. A tragic event that could have been avoided if they have had the courage to leave their comfort zone in time. Unfortunately, a  few of these people were then pushed far out of their comfort zone into unemployment and social deroute.

Why are leaders afraid of leaving their comfort zone?

The answer we usually get when asking them directly is that they are afraid of making mistakes and that the image other people (the followers) have of them is way beyond what they feel they are capable of delivering.

As long as the business operation goes smoothly it is easy to live with these high expectations to you as a leader because you don’t disappoint anyone. But as soon as you enter some kind of turbulence e.g. external pressure, takeover or financial crisis you can’t hide as a leader. You have to stand up and show the way through the minefield. And most leaders don’t want to do that because their followers might find out that they are just ordinary human beings with fears like everybody else.

As unlogic as it may sound – a fair number of leaders who end up in that situation decides to do nothing hoping that the uncomfortable situation goes away – and it does, but always with a catastrophic outcome.

We rarely know the leaders we admire. We create an image in our head that fits the need we have right now.

When everything is normal 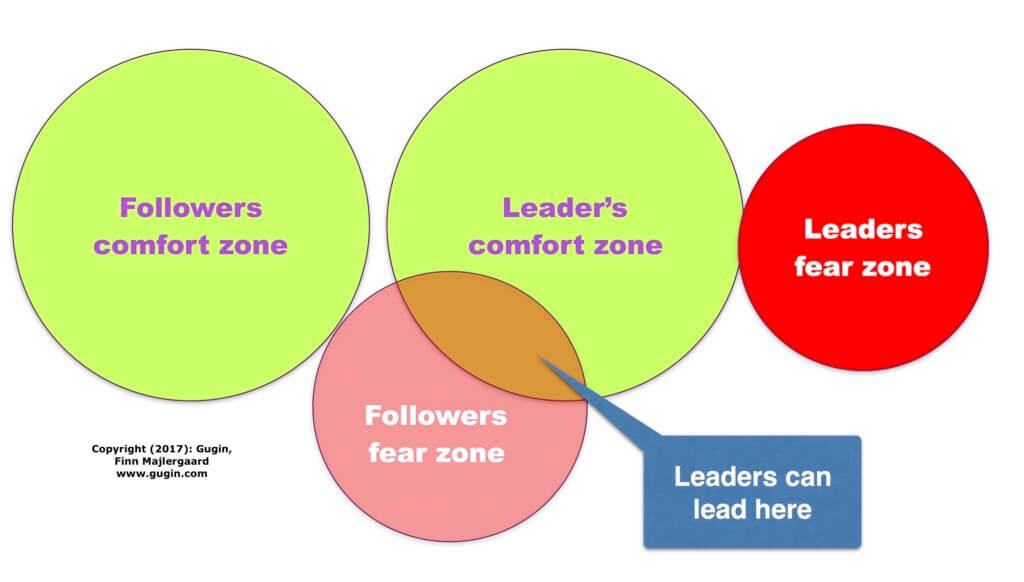 When everything is normal the followers will never discover their leader’s fears because it is hidden to them and the leader is comfortable leading and managing inside his or her comfort zone.

When suddenly the world change it becomes dangerous for the leader. If you go through a merger or acquisition you are as a leader pushed far out of your comfort zone because a lot of new things are happening and people around you start to behave in ways you have never seen before. That change in behaviour influences you as a leader a lot. and suddenly you are in this situation: 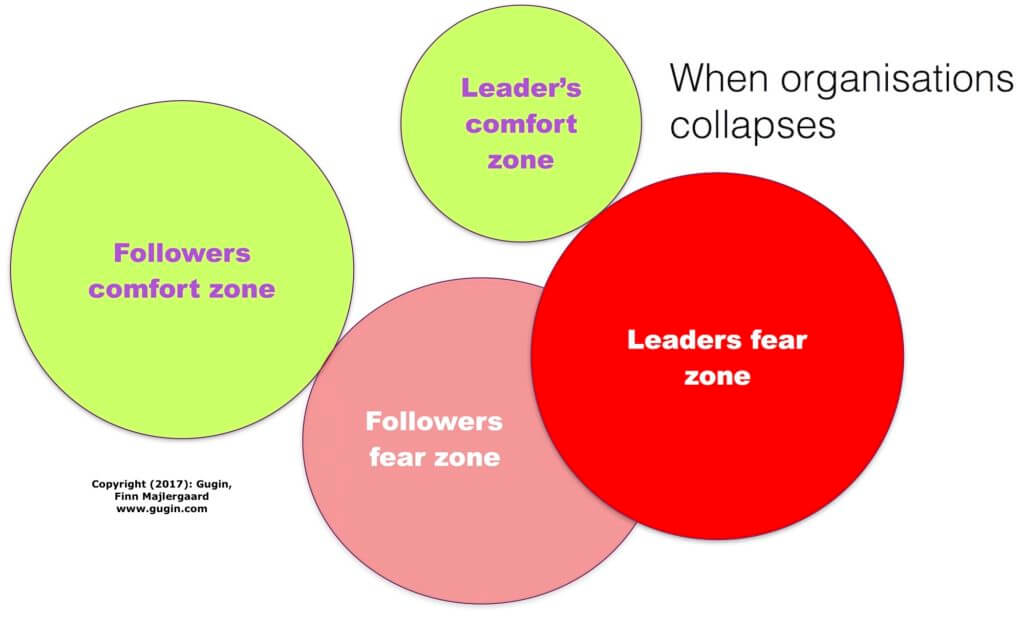 The worst case scenario is becoming reality. You, the leader share your fears with the people who look up to you because you too is far out of your comfort zone. In the beginning, you try to pretend you are in control and know which way to go, but your followers rapidly sense that you don’t.

You become afraid and more introvert than ever before. Your followers become more desperate and the best people will leave the company, while the rest either spend their time looking for alternatives or stress themselves out in order to make sense of what is going on.

But it doesn’t have to be this way

We only end up in these chaotic and tragic situations because we let them. We do actually have a choice and you as a leader can make this choice. But you have to make that choice as soon as you can see something unusual is showing up on your radar screen. It is too late to avoid the iceberg when you can see it in front of your windows on the bridge.

When you can see something on your radar screen you don’t know exactly how to deal with getting someone on board who is comfortable with this new situation (A pilot). You are still the captain but the pilot will help you make the right decisions when going through the transition. This way your followers will remain calm even if you are introducing a lot of changes to them.

Unfortunately, we (in Gugin) are often consulted when it is too late. We then have to conduct a damage control instead of planning a safe way through the transition. It is unfortunate for a lot of reasons. The company loses a lot of money, good people, customers and strategic momentum. A lot of people often pay a very high personal cost and we like a lot more acting as a pilot taking the company through a change than acting as a rescue team.

Please get in touch in time.

Get in touch today